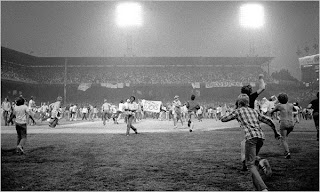 35 Years ago this week on July 12th, 1979, tens of thousands of disco records were blown up in between games of a doubleheader at Comiskey Park in Chicago as part of a publicity stunt. Instead it may have opened up a door to long suppressed rage and prejudice against the minorities who supported disco from its underground start in the late 60s/early 70s through its rise into the mainstream. Rock fans acted threatened by a genre of music which seemingly took over the airwaves as all-disco formats popped up replacing once popular rock playlists. Though one look at the charts says that's not true. Even with disco riding high on many of the top chart positions, the Top 40 was as diverse as it had always been.

Tonight at 8PM est live on Asheville FM, in a nod to the late Casey Kasem, The UnCola will revisit the Top 40 charts, as reported to Billboard for the week ending July 14th, 1979, and the count them down from #40 to #1.
Posted by The UnCola at 1:40 PM

Email ThisBlogThis!Share to TwitterShare to FacebookShare to Pinterest
Labels: 1979, disco

The UnCola
Asheville, NC, United States
We're a radio show that plays Forgotten pop from the last 50 years, broadcasting live every Tuesday from 8-10 PM EST since 2009 on 103.3 Asheville FM. Join us each week as we breathe new life into failed 45s and album cuts left behind here at The UnCola. If you have a request or comments, send us an email at erikmattox at ashevillefm dot org. We love discovering new music!