Clams on the Half-shell and Rollerskates 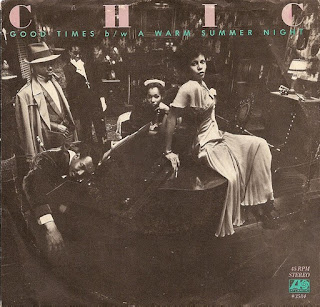 It was sad that Chic never had any more Top 40 hits after they released Good Times, but in a way it makes sense. Not that they didn't have good songs after this - they certainly did. And I'm sure they didn't want the ride to end. But if you're gonna out, at least in the public's eye, this is the song to go out on.

This tune turned Chic from some disco group with a few hits to one of the most important bands in history. The entire next decade of music suddenly had a pivot point from the moment Nard dropped his bass out on the 4. How can you fully quantify the influence of a song that, at once, instantly makes B-boys from the Bronx and New romantics from Britain want to start a band? There wasn't a block party happening without this tune. Every New Wave bass player wanted to be Bernard Edwards and every rhythm guitarist wanted to be Nile Rodgers. This was the spark in the fire of rap & new wave simultaneously. That's pretty amazing.

And whether I'm digging on this jazz funk that Chic lays down for 8 minutes, singing along with Fonzi Thornton as he hits his third over Alfa & Luci on the chorus or slap my hand in the air on cue with the string slide at the start of the breakdown, I can't help but feel the inner sadness at the heart of this record. Yes these are the good times. That's what they're saying, followed by 'a rumor has it that it's getting late. Time marches on, just can't wait....you can't change your fate.' Should I be dancing or crying? Nile knew the party was over as they hoped they it would never end. That's they captured both feelings in this song is a measure of Nile & Nard's talent. That a rappin granny spit a few verses of Rapper's Delight over this groove in The Wedding Singer is a measure of how little we treasure it.